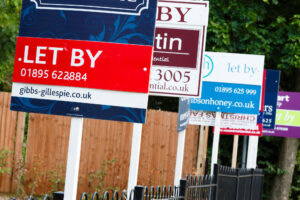 Private rents in some of the UK’s biggest city centres have fallen by up to 12% in a year but have risen sharply in parts of northern England as some tenants swapped an urban life for the suburbs, smaller towns and villages.
Property website Rightmove’s latest rental trends report said the pandemic had led to falling asking rents and a “flood” of properties coming on to the market in many areas.
Central London has been “hardest hit”, said the website, with average asking rents down by 12.4% on a year ago, followed by Edinburgh city centre, which was down 10%, and Manchester city centre, down 5.3%.
Away from city centres it was a different picture, with agents reporting busy markets and rising rents.
Rightmove named the top three highest growth areas outside London as the city of Durham, the town of Keighley in West Yorkshire, and Wigan in Greater Manchester.
In Durham, the average asking rent a month for a two-bedroom property jumped from £543 in the fourth quarter of 2019 to £632 in the same quarter last year – an increase of 16.4%. The equivalent annual RISES for Keighley and Wigan were 14.6% and 11.2%, respectively.
Rightmove looked closely at the centres of 10 of the UK’s biggest cities, and said there were regions where asking rents were still rising on an annual basis, including Bristol and Liverpool, although the 2% increase in both of those locations was below the national average of 3.7%.
The number of rental properties on Rightmove more than doubled in some city centres, with the biggest jumps in Leeds, London and Nottingham.
Tim Bannister, Rightmove’s director of property data, said its findings on rents “bring a challenge for some landlords, but also an opportunity for tenants who may be able to make a longer-term decision and move into a city centre now … at a more attractive rent than this time last year”.
Inner London £2,219 (-12.4%)
Edinburgh £1,124 (-10%)
Manchester £1,022 (-5.3%)
Birmingham £883 (-4.6%)
Leeds £811 (-4.4%).
*Figures are per month
The five highest rental growth areas outside London*
Durham, County Durham £632 (+16.4%)
Keighley, West Yorkshire £556 (+14.6%)
Wigan, Greater Manchester £559 (+11.2%)
Rochdale, Greater Manchester £585 (+10.8%)
Rossendale, Lancashire £548 (+10.3%).
* Average asking rent a month for two-bed property
Read more:
Private rents fall in UK’s biggest cities by up to 12% amid Covid crisis
Share Tweet Pin it +1
Read The Rest at : https://www.bmmagazine.co.uk/feed/