Jeff Bezos to stand down as Amazon chief executive 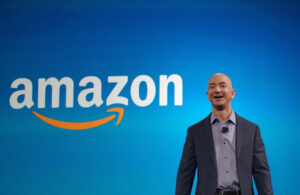 Jeff Bezos is preparing to stand aside as chief executive of Amazon after it beat Wall Street’s high expectations last night with record quarterly sales and profits.
Having overseen its rapid transformation from online bookseller to the world’s largest digital retail business, Bezos, 57, will become executive chairman this year. He said that now was the “optimal time” for such a transition. Andy Jassy, who leads Amazon’s cloud computing division, will succeed him as chief executive.
The ecommerce group reported a 44 per cent increase in revenue to $125.6 billion — its first quarter above $100 billion — as coronavirus restrictions prompted many millions of consumers to shop online. Profit more than doubled to $7.2 billion in the last three months of 2020.
Amazon, which has more than 40,000 staff in the UK, is the world’s largest ecommerce business, with groceries, internet advertising and video and music streaming among its sprawling empire of interests. Through its web services division, it is also the largest cloud computing company.
Bezos, the world’s richest person, set up Amazon in 1994. He will take up his new role in the third quarter in a move he insisted last night “isn’t about retiring” but was creating time for other projects. Shares in Amazon rose by 1.6 per cent to $3,433.51 in after-hours trading, valuing it at $1.7 trillion.
Describing Jassy, 53, as an “outstanding leader”, Bezos told staff that he intended to focus on new products and initiatives in his new position. Amazon “is what it is because of invention”, he said. “If you do it right, a few years after a surprising invention, the new thing has become normal. People yawn. That yawn is the greatest compliment an inventor can receive.
“When you look at our financial results, what you’re actually seeing are the long-run cumulative results of invention. Right now I see Amazon at its most inventive ever, making it an optimal time for this transition.”
The company’s stock rose by more than 100 per cent last year as the pandemic drove demand for its services by prompting people to work, study, shop and play at home.
Bezos announced his decision as many areas of Amazon’s businesses, including third-party service sales, such as warehousing, beat market expectations. Its web services division, led by Jassy, fell marginally shy of forecasts, however, with revenue of $12.7 billion. Wall Street analysts had expected $12.8 billion from the unit, which typically generates more than half Amazon’s operating income.
Jassy, who joined the company in 1997, has led its cloud computing business since its inception in the early 2000s. He attended Harvard Business School and is a minority investor in the Seattle Kraken, an ice hockey team.
He has publicly echoed the ethos espoused by Bezos, telling the Silicon Angle website last autumn: “Any time we’re not statistically indistinguishable from perfect, we’re going to be unhappy.”
Yesterday Amazon revealed designs for its second headquarters in Arlington, Virginia, with a double helix at the site’s centre.
The US Federal Trade Commission announced yesterday that Amazon would pay $61.7 million to settle charges that it had failed to pay some drivers the full proportion of tips from customers over two and a half years. The company said that it was “pleased to put this matter behind us”.
Read more:
Jeff Bezos to stand down as Amazon chief executive
Share Tweet Pin it +1
Read The Rest at : https://www.bmmagazine.co.uk/feed/