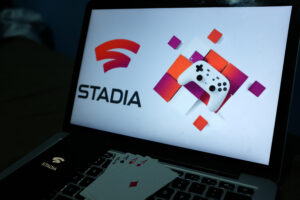 Google has shuttered its internet game development studio, the company has announced, and is all but abandoning the idea that Stadia, its groundbreaking streaming service, could be a top-tier competitor to traditional games consoles.
In a blogpost from Phil Harrison, the former Microsoft and Sony exec who was hired to mastermind Google’s push into console gaming, the Stadia general manager confirmed it was scaling back its ambitions, but insisted that the company’s core vision, of “having games streamed to any screen”, was still achievable.
“In 2021, we’re expanding our efforts to help game developers and publishers take advantage of our platform technology and deliver games directly to their players,” Harrison said. “We see an important opportunity to work with partners seeking a gaming solution all built on Stadia’s advanced technical infrastructure and platform tools. We believe this is the best path to building Stadia into a long-term, sustainable business that helps grow the industry.”
But the “new focus” of Stadia also sees Google abandoning its attempts to build exclusive games for the platform. The company’s internal development team, SG&E, is being disbanded, resulting in the loss of an estimated 150 jobs, and only “near-term planned games” are expected to see release. SG&E has yet to finish a single game, and its high-profile lead, former Ubisoft producer Jade Raymond, will also be leaving Google, Harrison confirmed.
Stadia will continue to work as a consumer offering, the company confirmed, with third-party games being brought to the platform. “Our goal remains focused on creating the best possible platform for gamers and technology for our partners, bringing these experiences to life for people everywhere,” Harrison wrote.
In practice, however, there are few meaningful partners for Stadia to work with. Of the major console manufacturers, Nintendo has historically valued control of hardware, while Microsoft and Sony each own and operate a substantial mature cloud gaming service of their own.
Stadia’s 2019 launch was an underwhelming affair. The service was only available to those who paid more than a hundred pounds for the Founder’s Edition, which included a standalone controller and a Chromecast to stream to a TV, as well as three months of the Stadia Pro subscription service. But for their money, early adopters could only play a handful of titles, including just one Stadia exclusive, and with most of the games requiring a further payment of the full RRP before they were available. Promised features, such as the ability to join a game direct from a YouTube live stream, or to share a URL that would let players jump into a saved game with a single click, were not present, and some still have yet to launch.
But Stadia received praise for achieving the difficult task of actually building a streaming games service that worked: with low latency and high resolutions, at least on fast connections, Google’s technical prowess was on display.
Read more:
Google Stadia closes in-house game development studio
Share Tweet Pin it +1
Read The Rest at : https://www.bmmagazine.co.uk/feed/