UK in ‘constructive’ talks with EU over Northern Ireland protocol 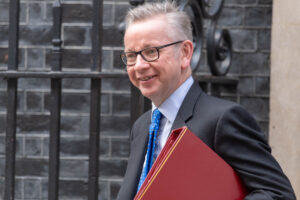 Michael Gove and the European commission vice-president, Maroš Šefčovic, are to meet in London next week after a “constructive” discussion over problems with application of the Northern Ireland protocol.
On Wednesday, the UK asked for a two-year transition period on the core elements to the protocol, including checks on food and delivery of online shopping entering the region from Great Britain.
The timing of the request by Gove was seen as capitalising on the calamitous triggering of article 16 in the protocol by the EU last Friday as part of an attempt to block Covid vaccines getting into the UK. The move – intended to stop vaccines moving into Northern Ireland from the Republic – met with immediate criticism and was rescinded almost immediately.
The virtual meeting on Wednesday evening, which was also attended by Northern Ireland’s first minister, Arlene Foster, and the deputy first minister, Michelle O’Neill, appears to have restored some calm in an escalating crisis that saw border officials taken off their Brexit duties in Belfast and Larne ports on Tuesday amid fears for staff safety.
In a joint statement Gove and Šefčovic said: “After a constructive discussion amongst all parties [it was] concluded that the UK and the EU would immediately work intensively to find solutions to outstanding issues … [Gove and Šefčovič] will keep in close contact as this work progresses, and will meet again next week in London.”
The meeting came after Boris Johnson accused the EU of appearing to “cast doubt” on the Good Friday agreement, with last week’s decision to invoke article 16.
It is understood that a new specialised committee, mandated under the Brexit deal, will be quickly set up and will convene in the next two weeks to thrash out a solution. A signoff is expected at a meeting of the UK-EU joint committee, which Gove and Šefčovič pencilled in for mid-March.
Earlier, speaking at prime minister’s questions after a call with Foster, Johnson said: “It was most regrettable that the EU should seem to cast doubt on the Good Friday agreement, the principles of the peace process, by seeming to call for a border across the island of Ireland.”
Johnson told MPs: “We will work to ensure that there are no such borders, we will respect the peace process and, indeed, no barriers down the Irish Sea and the principle of unfettered access across all parts of our United Kingdom is upheld.”
Gove, in a strongly worded letter to Šefčovic, had demanded six major concessions to the Northern Ireland protocol including extensions on the current three-month grace period for checks on supermarket food supplies from Great Britain to Northern Ireland to 1 January 2023, and a “permanent solution” on chilled meats from GB.
He is also seeking extension of the current temporary arrangements for parcel post from Great Britain to Northern Ireland for the same period to allow time for a “light touch permanent solution to be codified”. This will address dismay from consumers that they can no longer get goods from high street chains such as John Lewis or Currys delivered to Northern Ireland.
The UK also wants a common travel area for pets, changes on steel quotas for the region and medicine supplies to continue as normal.
Gove said the UK wanted “urgent resolution” of the problems and that lengthy technical discussions, the hallmark of Brexit negotiations, were not acceptable.
“What is required is political, not technical solutions,” he said.
Gove implicitly warned that the UK could invoke article 16 unless its demands are met. “If it is not possible to agree a way forward in the way we propose, then the UK will consider using all instruments at its disposal.”
While Šefčovic made clear earlier that there was no question of the protocol being scrapped, he agreed in the joint statement with Gove after the talks that “avoiding disruption to the everyday lives of the people of Northern Ireland” was vital as was “protecting the gains of the peace process” and “maintaining stability” in the region.
Under the protocol in the Brexit withdrawal agreement designed to avoid a hard border on the island of Ireland, Northern Ireland effectively remains in the EU’s single market. The full EU customs code is also to be enforced across the Irish Sea on goods coming from the rest of the UK but its application to the letter has caused cross-community dismay in Northern Ireland.
In the Commons, DUP MP Ian Paisley urged Johnson to “be the unionist we need you to be” by legislating if necessary to make sure goods can flow freely between Great Britain and Northern Ireland.
Paisley said the Northern Ireland protocol had “betrayed us, and has made us feel like foreigners in our own country”, and reminded Johnson that he had told businesses in Northern Ireland they could “bin” any paperwork they were asked to fill out after Brexit.
Johnson promised to do everything he could to ensure trade flows freely, “whether legislatively or indeed by invoking article 16 of the protocol”.
O’Neill said it was imperative that the protocol worked and “solutions must be found to support business … to ensure smooth trading operations”.
She called for the urgent establishment of a new specialised committee and working group, mandated in the Brexit trade deal to work through implementation issues over the long term.
Read more:
UK in ‘constructive’ talks with EU over Northern Ireland protocol
Share Tweet Pin it +1
Read The Rest at : https://www.bmmagazine.co.uk/feed/