Early adopters of tech: the young British Asian demographic is ahead of the curve 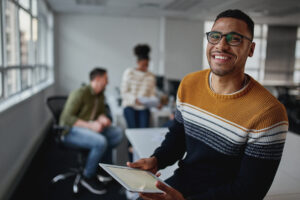 Young British Asians tend to be early adopters of new tech, and by learning how to engage with this expanding market could allow a brand to develop a strong consumer network effect for their products or services, this is according to integrated marketing agency, Mediareach.
Collectively, British Asians make up nearly 7% of the population , and 34.3% of them are between the ages of 18 and 34 . Most notably, Indian and Chinese groups are the most affluent ethnic groups in the UK, with 42% of Indian and 29% Chinese households attaining an average weekly income of more than £1,000 , compared to 28% of their White British counterparts.
Saad Al-Saraf , CEO at Mediareach, stated: “ A recent report called ‘From Ostrich To Magpie’ published by the Confederation of British Industry (CBI), said that the low take-up of readily available technologies could be driving the UK’s productivity problem.
“The CBI created a separation between ‘ostriches’, those who keep their head in the sand and avoid new tech, and ‘magpies’, those who are drawn to cutting-edge products. The report stated that if British companies addressed this issue and became ‘magpies’, they could add more than £100bn to the UK’s Gross Value Added (GVA).”
Not everyone in Britain is lagging behind, though.
“In order to identify how a certain market approaches disruptive and innovative ideas, the technology adoption life cycle , that’s made up of five categories, was created. Going in line with the analogy made by the CBI, the first two fall into the ‘magpie’ side of the spectrum, the third one is neutral, and the remaining two belong in the ‘ostrich’ category,” continued Al-Saraf.
First up, are the ‘innovators’, who usually make up 2.5% of a certain market. They are the first ones to embrace innovation and are always willing to take risks . This is down to the fact that they generally tend to have higher incomes and are from a younger demographic. The next category is the ‘early adopters’, who typically make up around 13.5% of the market. They tend to be of the same age and social class as the innovators, but the key difference is that they are also opinion leaders and can shape the public perception of a brand and its products.
Another category is the ‘early majority’ who make up around 34% of a consumer market. They often adopt new technologies at varying speeds. They take longer than innovators and early adopters to accept disruptive ideas and products, but their level of income is about the same. The opinions of early adopters can easily sway them.
The ‘late majority’ make up 34% of consumers. They are characterised as having a below average-income, little to no contact with innovators and early adopters, and a very high degree of scepticism. Finally, the ‘laggards’ make up the remaining 16% of the tech market. They tend to be older, have lower incomes and like to stick with traditions. This group has no sway on the opinions of any of the other consumer categories.
Al-Saraf added: “It is no secret that the Asian market, especially the younger generation, are quick to adapt to innovation. A survey found that 33% of them said that they were always among the first to try new technologies and electronic products, whilst 69% said they were open to making purchases on smart home devices, such as smart speakers.
“Although these figures look at consumers within Asia, it doesn’t mean that there aren’t lessons to learn for brands looking to target British Asian consumers. As a growing number of students and professionals from the region arrive in the UK in search of new opportunities each year, brands should learn how to engage with and profit from this expanding market. For example, a study by Barclays Wealth found that 47% of China’s High Network Individuals (HNWIs) plan to move abroad within the next five years, with the UK being among their top destinations. Elsewhere, brands could also look at targeting increasingly wealthy Asian tourists (obviously more-so post-pandemic).”
It’s worth noting that Asian audiences have also been found to be less loyal to brands, giving newer companies a chance to attract consumers who are purchasing from competitors. Better still, this demographic loves new experiences and enjoys sharing their perspective and being heard. For companies, understanding where early adopters’ greatest potential lies, in this case, young British Asians, could allow a brand to develop a strong consumer network effect for their products and services.
“As the Asian community grows in both numbers and wealth, creating specific marketing strategies to target all the different sub-groups within this category is an excellent step for brands to take. Most importantly, knowing who you need to engage with and how to do it, can be make-or-break when looking at the potential success of a new product,” concluded Al-Saraf.
Read more:
Early adopters of tech: the young British Asian demographic is ahead of the curve
Share Tweet Pin it +1
Read The Rest at : https://www.bmmagazine.co.uk/feed/